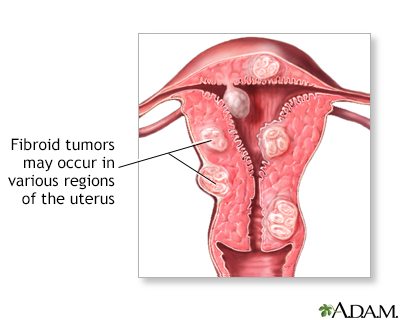 Fibroids are abnormal growths that develop in or on a woman’s uterus. Sometimes these tumors become quite large and cause severe abdominal pain and heavy periods. In other cases, they cause no signs or symptoms at all. The growths are typically benign, or noncancerous. The cause of fibroids is unknown.

Fibroids are also known by the following names:

According to the Office on Women’s Health, up to 80 percentTrusted Source of women have them by the age of 50. However, most women don’t have any symptoms and may never know they have fibroids.

What are the different types of fibroids?

The type of fibroid a woman develops depends on its location in or on the uterus.

Subserosal fibroids form on the outside of your uterus, which is called the serosa. They may grow large enough to make your womb appear bigger on one side.

Subserosal tumors can develop a stem, a slender base that supports the tumor. When they do, they’re known as pedunculated fibroids.

These types of tumors develop in the middle muscle layer, or myometrium, of your uterus. Submucosal tumors aren’t as common as the other types.

It’s unclear why fibroids develop, but several factors may influence their formation.

Estrogen and progesterone are the hormones produced by the ovaries. They cause the uterine lining to regenerate during each menstrual cycle and may stimulate the growth of fibroids.

Fibroids may run in the family. If your mother, sister, or grandmother has a history of this condition, you may develop it as well.

Pregnancy increases the production of estrogen and progesterone in your body. Fibroids may develop and grow rapidly while you’re pregnant.

Who is at risk for fibroids?

Women are at greater risk for developing fibroids if they have one or more of the following risk factors:

What are the symptoms of fibroids?

Your symptoms will depend on the number of tumors you have as well as their location and size. For instance, submucosal fibroids may cause heavy menstrual bleeding and trouble conceiving.

If your tumor is very small or you’re going through menopause, you may not have any symptoms. Fibroids may shrink during and after menopause. This is because women undergoing menopause are experiencing a drop in their levels of estrogen and progesterone, hormones that stimulate fibroid growth.

Symptoms of fibroids may include:

How are fibroids diagnosed?

For a proper diagnosis, you’ll need to see a gynecologist to get a pelvic exam. This exam is used to check the condition, size, and shape of your uterus. You may also need other tests, which include:

An ultrasound uses high-frequency sound waves to produce images of your uterus on a screen. This will allow your doctor to see its internal structures and any fibroids present. A transvaginal ultrasound, in which the ultrasound wand is inserted into the vagina, may provide clearer pictures since it’s closer to the uterus during this procedure.

This in-depth imaging test produces pictures of your uterus, ovaries, and other pelvic organs.

How are fibroids treated?

Your doctor will develop a treatment plan based on your age, the size of your fibroids, and your overall health. You may receive a combination of treatments.

Certain home remedies and natural treatments can have a positive effect on fibroids, including:

Dietary changes can help as well. Avoid meats and high-calorie foods. Instead, opt for foods high in flavonoids, green vegetables, green tea, and cold-water fish such as tuna or salmon.

Managing your stress levels and losing weight if you’re overweight can also benefit women with fibroids.

Medications to regulate your hormone levels may be prescribed to shrink fibroids.

Gonadotropin-releasing hormone (GnRH) agonists, such as leuprolide (Lupron), will cause your estrogen and progesterone levels to drop. This will eventually stop menstruation and shrink fibroids.

Other options that can help control bleeding and pain, but won’t shrink or eliminate fibroids, include:

Surgery to remove very large or multiple growths may be performed. This is known as a myomectomy. An abdominal myomectomy involves making a large incision in the abdomen to access the uterus and remove the fibroids. The surgery can also be performed laparoscopically, using a few small incisions into which surgical tools and a camera are inserted. Fibroids might grow back after surgery.

If your condition worsens, or if no other treatments work, your physician may perform a hysterectomy. However, this means that you won’t be able to bear children in the future.

A newer and completely noninvasive surgical procedure is forced ultrasound surgery (FUS). You lie down inside a special MRI machine that allows doctors to visualize the inside of your uterus. High-energy, high-frequency sound waves are directed at the fibroids to ablate, or destroy, them.

Another nonsurgical option is uterine artery embolization. In this procedure, small particles are injected into the uterus in order to cut off the fibroids’ blood supply.

What can be expected in the long term?

Your prognosis will depend on the size and location of your fibroids. Fibroids may not need treatment if they’re small or don’t produce symptoms.

Coronavirus disease (COVID-19) is an infectious disease caused by a new virus and has spread in a lot of countries in the world.

HOW IT SPREADS
Coronavirus disease spreads primarily through contact with an infected person when they cough or sneeze. It also spreads when a person touches a surface or object that has the virus on it, then touches their eyes, nose, or mouth.

Have your article published in one of our journal series. click here to learn more. If you are having problem with your submission, contact us or send an e-mail to technicalsupport@oasisinternationaljournal.org